First things first: I don’t care how annoying Jack Johnson’s Bubble Toes is. It brings a little happy feeling in my stomach of jamming out to the song back in my college dorm room while wearing flowy skirts and being weird. Totally unrelated to this post, except that I’m listening to it right now. 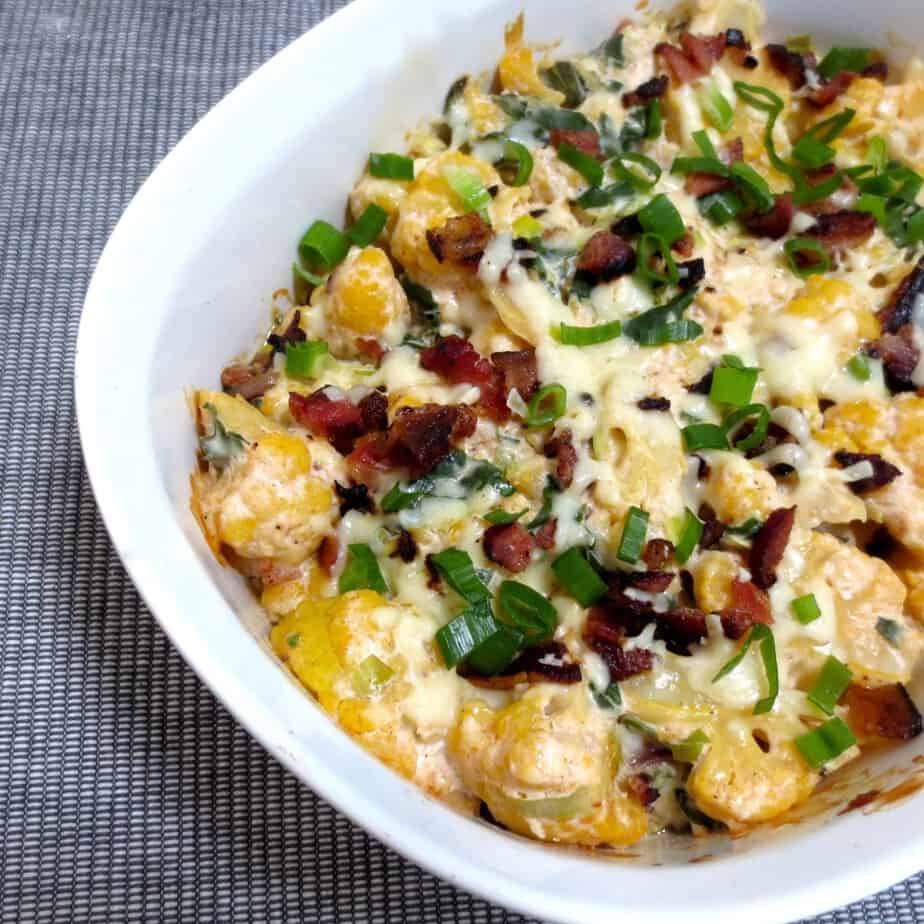 Second: This is something you should take to your Labor Day BBQ. No, it doesn’t go on the grill. Yes, it’s probably best warm, and yes, that means you have to use your oven. But, I mean, it’s like loaded baked potato skins without the potato. And for you bacon lovers out there – this has bacon. You’re welcome.

Does anybody know why cauliflower is on sale right now? I thought it was a winter vegetable, but I’m getting it in my CSA box, and it’s been on sale at Sprouts for several weeks. Not that I’m complaining or anything. 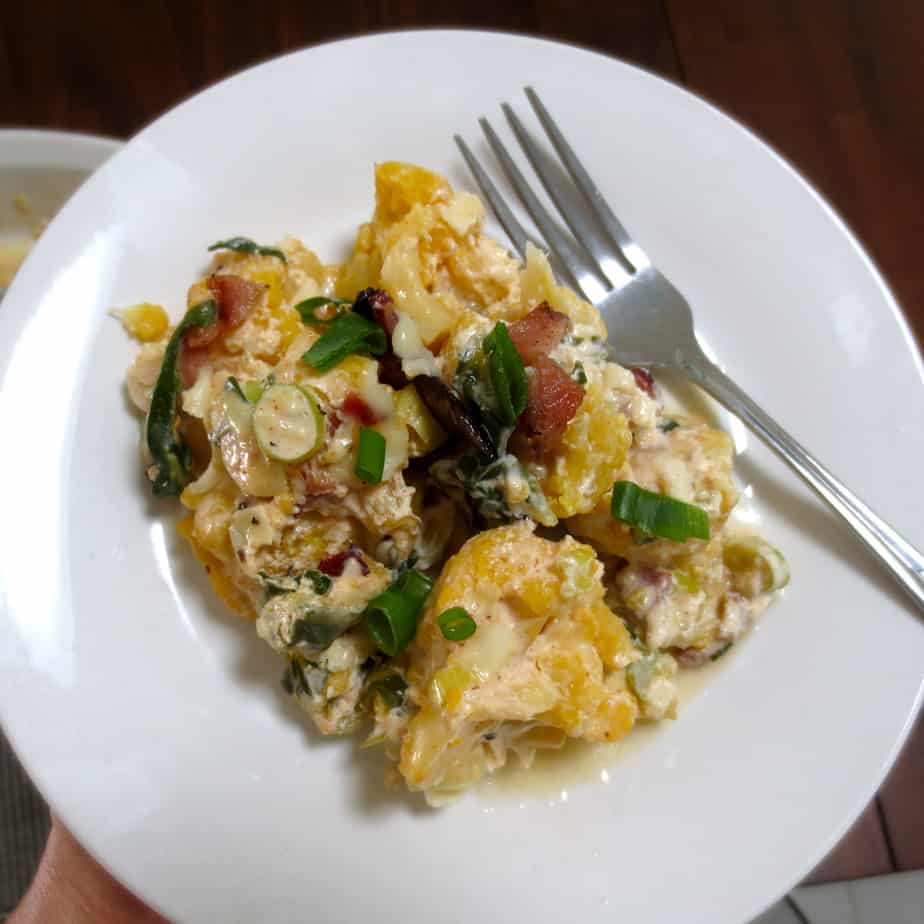 Let’s talk about this stuff. It’s got all your favorite loaded baked potato flavors, but with cauliflower! I don’t even like bacon. Seriously, I don’t. And this was still amazing. Oh and there’s a reason the cauliflower looks yellow. It’s technically “cheddar cauliflower” from my CSA box. Which apparently has a more “”buttery” flavor, but I thought it tasted basically the same. 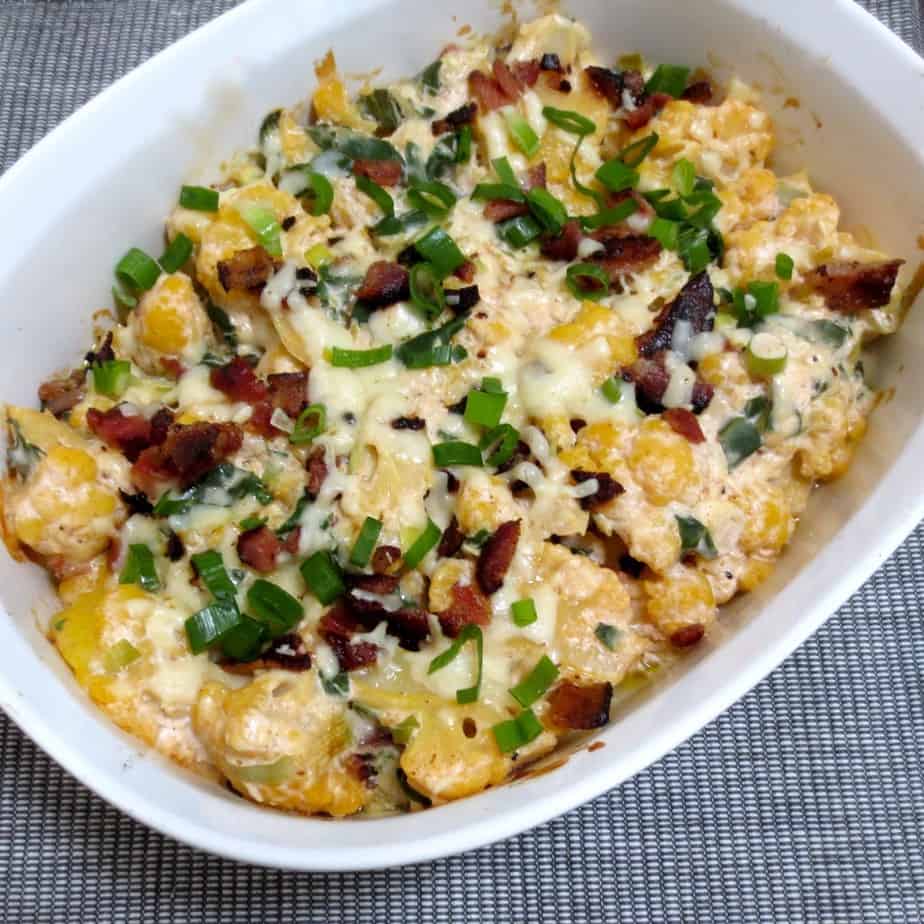 I really love potatoes. Let’s just put that out there. French fries are my raison d’être. (Well, and pizza. Pizza is my food Patronus though. And chocolate-chip cookies.) But I do have a few problems with potatoes. Sometimes, they’re put in delicious dishes where they get sad and soggy. And that is when I don’t love them. Crunchy breakfast potatoes? Fantastic. Crunchy breakfast potatoes at home = awesome. But when they’re covered in things like cheese and vegetables and eggs and not eaten right away, they get less awesome. They get soggy.

We recently had Poutine during our trip to Canada, and it was probably the saltiest thing I’d ever eaten, though still good. However, after all the crispy fries were consumed, neither of us wanted the gravy-laden sad and soggy ones left at the bottom. (PLUS: potatoes are super starchy and not super nutritious.) These are the reasons I didn’t use potatoes. 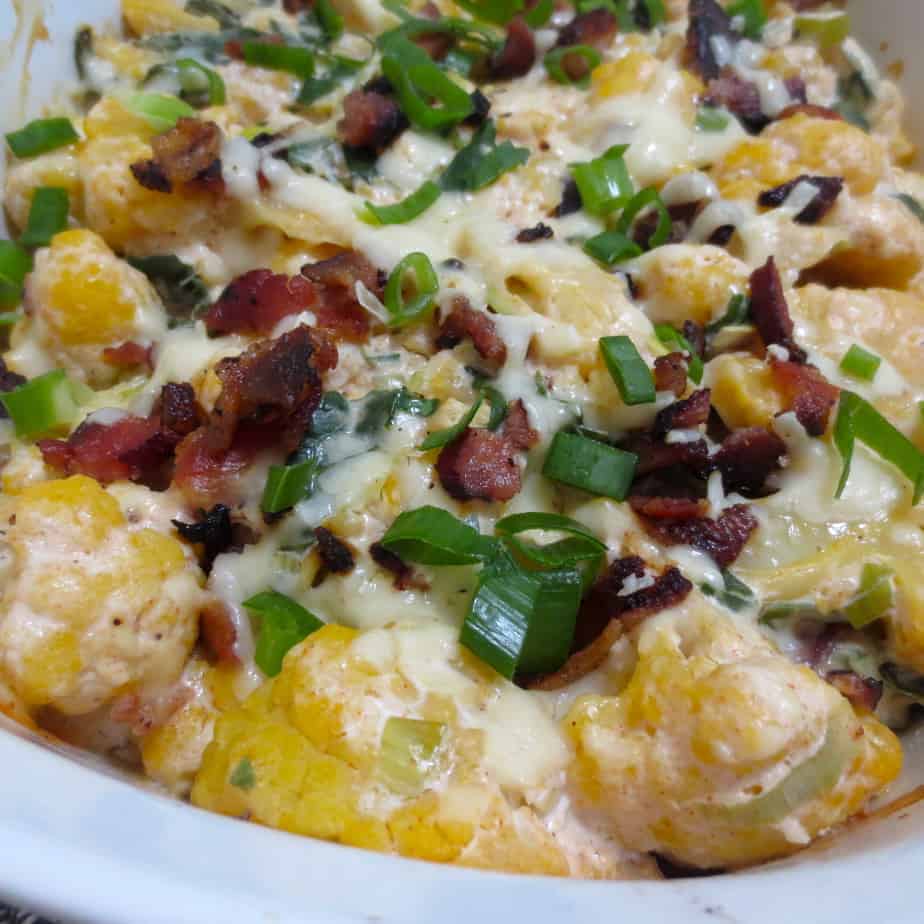 And why I think this dish is so perfect with cauliflower! It’s like taking those flavorless loaded twice-baked potatoes you could buy in the freezer section of TGIF-branded food (like, really TGIF, you’re only confirming all your appetizers come from cardboard boxes), and adding actual flavor, some leafy greens (swiss chard!), and removing the starchy potatoes. Because you should save the potatoes for crispy perfection.

I will say that this is definitely not the cheapest thing on the menu because it’s not really a full dinner for 6 people; however, I calculated for pretty expensive white cheddar ($4 for 7 oz), and Straus Organic Yogurt, both of which could be replaced with a cheaper option if necessary. We splurged a bit. You can replace the $6 Straus yogurt with $3 TJ’s organic plain yogurt. Feel free to sub out the swiss chard for a different green, or bulk up the meal by mixing in some chicken, or maybe even adding some potatoes. ;)

This dish was an instant hit. For realz. 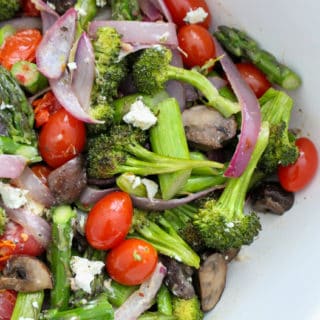