This is not pizza. This is, however, super delicious spaghetti squash casserole with the flavors of pizza, like oregano and tomatoes and even sausage. Hence the Pizza Spaghetti Squash Casserole. It’s really good, even adult spaghetti squash-haters (Zac), and picky kids seem to like it. It’s flavorful, it’s easy, and you should definitely make it! 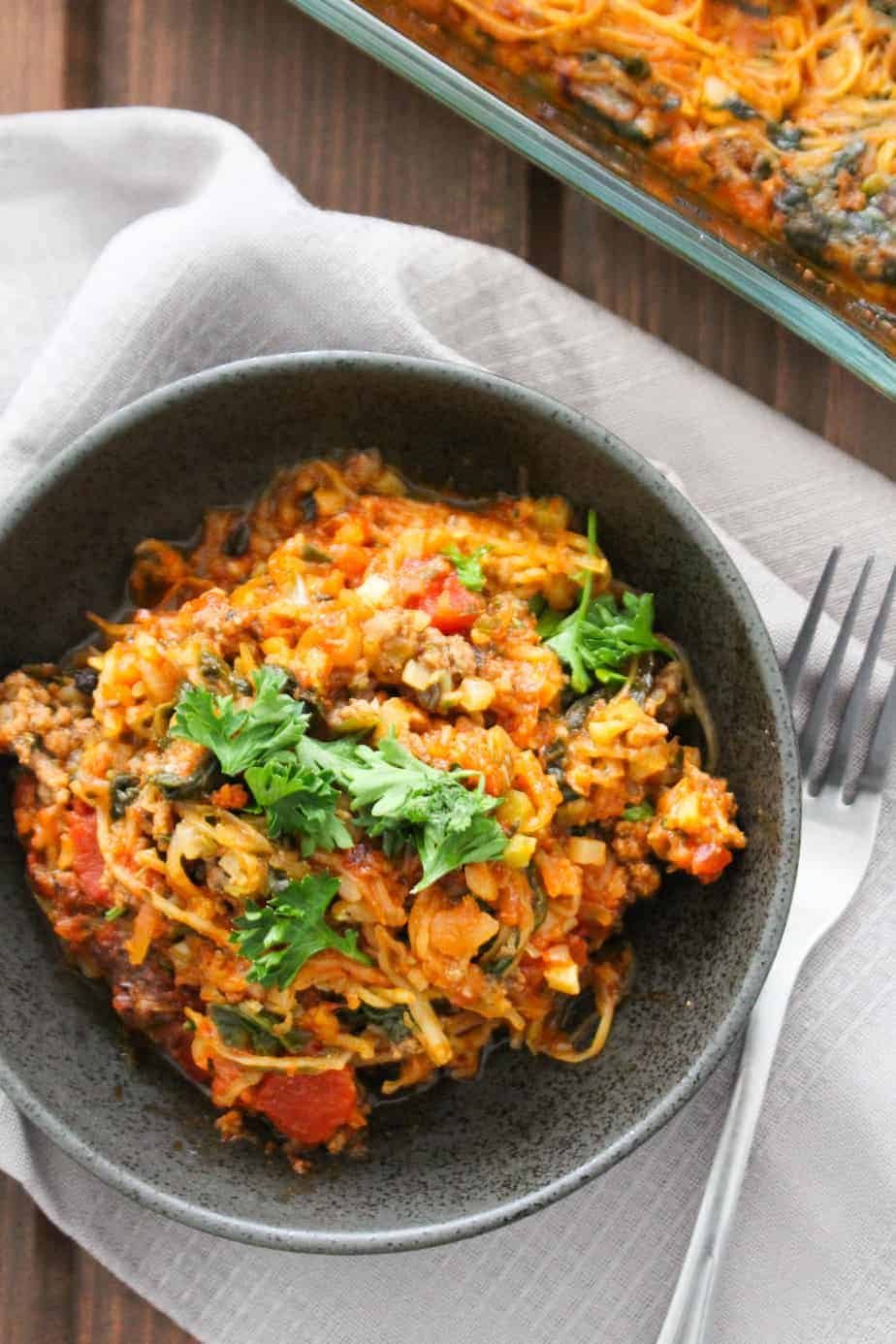 For a little over two years when I first moved to Baltimore I was a director and substitute preschool teacher for a daycare / preschool. It was equal parts awesome and awful, but I consider it an incredible opportunity, and I’d say everyone should spend a week working in a daycare before they’re allowed to make laws and policies for families, children, and minimum wage workers in this country.

Full disclosure: this post is a little long because I’m sharing my experience working with kids, so if you’re only here for the recipe, JUMP TO IT.

One of my first tasks as director was to clean up the snack menu, so I took over all the nutrition programming for the toddlers and preschoolers – including cooking projects, school lunch, and the twice daily snack menus. I’m really proud of that program, because I was able to get 30 kids off of weekly chicken nuggets and low-fat strawberry yogurt, and on to real chicken, beans, vegetables, and completely unsweetened yogurt. REALLY. After a few months of slowly mixing and phasing out the strawberry and vanilla yogurts, the kiddos were completely happy with full-fat plain yogurt, both greek and regular. (PSA: children should NOT eat sweetened yogurt. It is candy masquerading as a health food, tricking parents and children alike.)

I made a lot of changes to that menu, and I was able to really understand the struggles with food preparation for our school children. We live in a country where many of the lunch ladies themselves are so removed from cooking with real food, that their version of cooking from scratch is still preparing food products – not real food. Plus, our regulating bodies (USDA) are relying on completely outdated research to make their recommendations, which are further confusing parents, pediatricians, caregivers, and children.

My favorite lesson while there was understanding that kids need a lot less variety than we think. In fact, they like eating the same thing over and over because they know what to expect and they can have less stress around mealtimes. We may think they’re “sick of” something, but really, we’re projecting our own perspective; they’re probably just not that hungry, and that’s ok. It’s good to give kids variety because that’s how they learn that more foods are “safe,” but variety can be as simple as one new thing a day. Instead of just carrots and hummus today, try carrots, snap peas, and hummus. The combination of safe foods and new foods makes kids more likely to expand their palates, which is the ultimate goal for optimal nutrition! 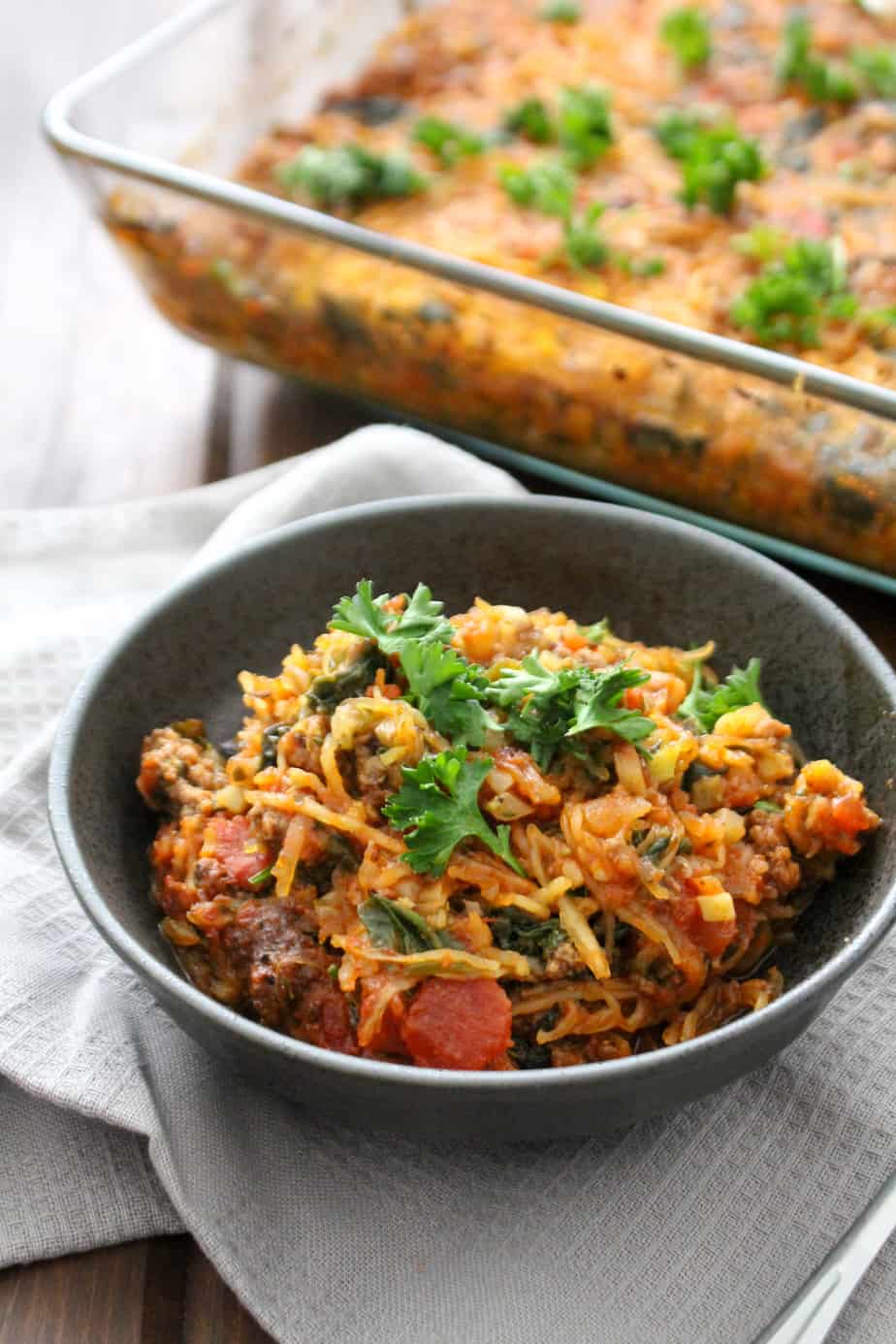 I don’t know what it is about red sauces, but during my two years of feeding 30 kids, red sauces were the magic ticket to getting them to eat nearly anything. Hate vegetables? Add marinara. Hate beans and meat? Add pizza sauce. Hate yogurt? Add pureed raspberries. This pizza spaghetti squash dish was a real sleeper hit for the kids; I’d had some mild success with spaghetti squash for the kids who were buying lunch, so I figured some pizza-flavored squash might work well for the full school, but a lot of people don’t like spaghetti squash so I didn’t have high hopes. Aside from the one child who would lick the noodles and place them aside, this was a pretty popular dish while I was cooking for the kids. 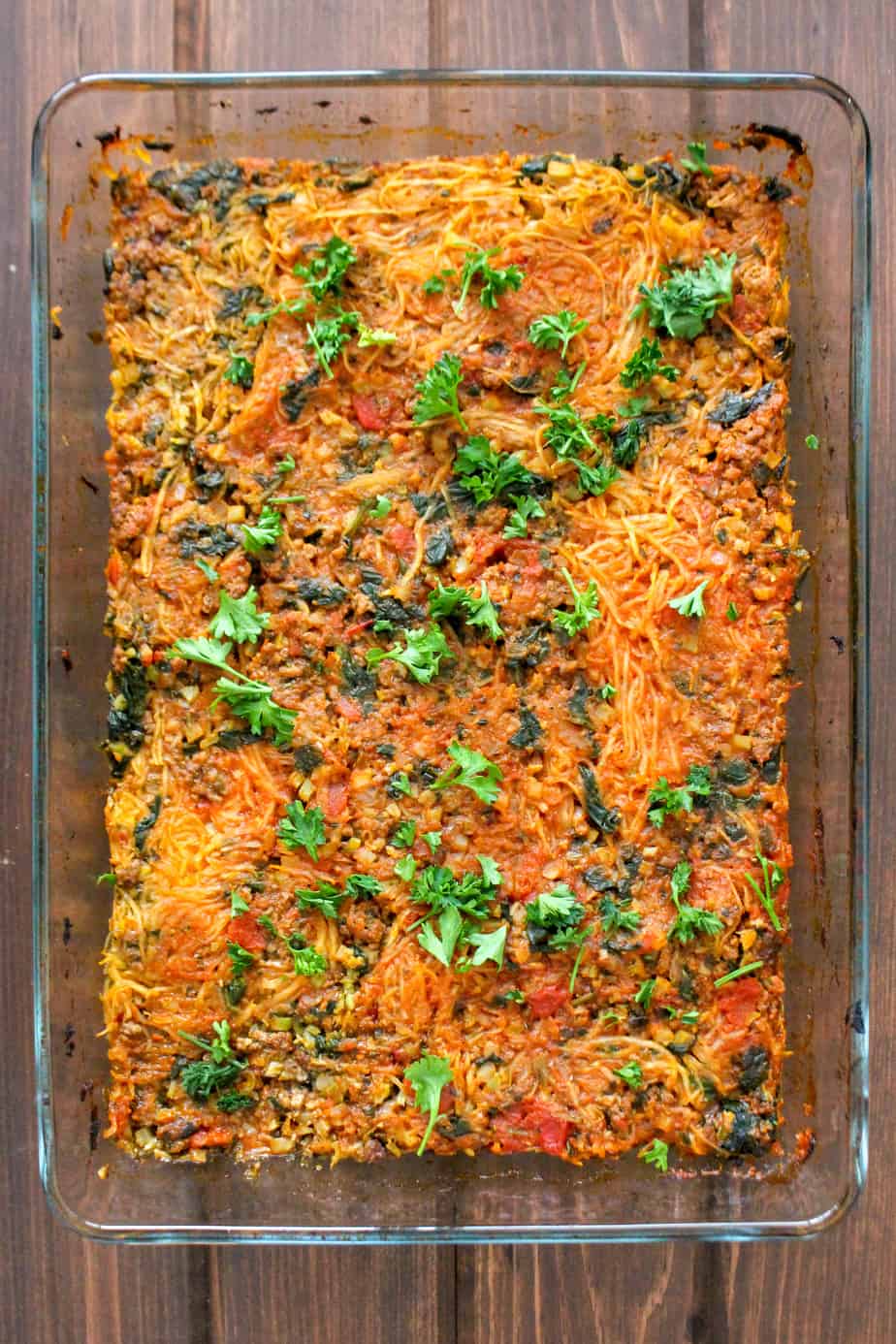 Making this is usually a pretty straight forward affair: 1 spaghetti squash, 1 pound pork or beef with spices, 1 jar organic pizza sauce, 12ish oz vegetables. Optional alterations include: cheese, bell peppers, olives, ground turkey or chicken, fresh basil, or whatever else you like on pizza. I usually make this as written, but I have added minced onion and bell peppers in the past, and I’ve also made it with cheese. It’s super easy and delicious! 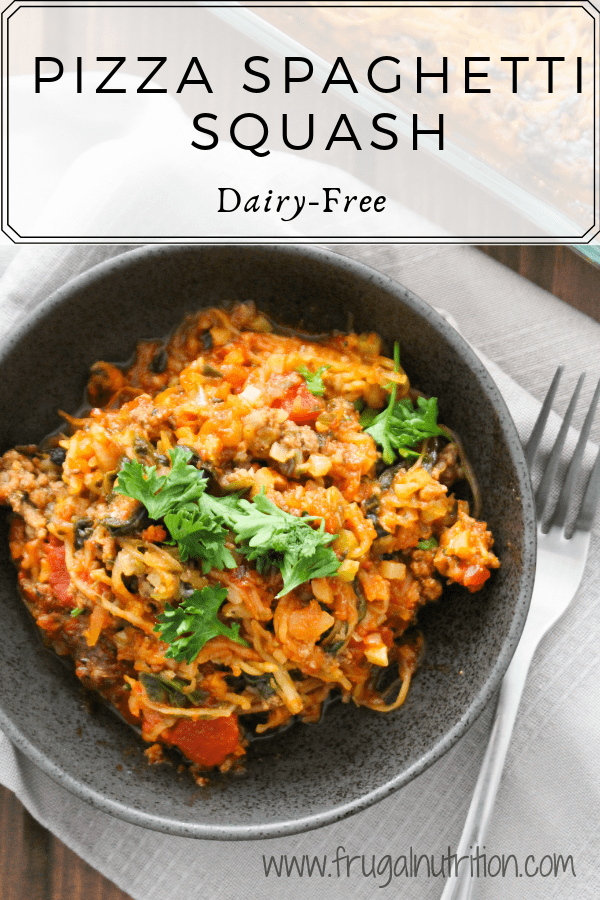 Paleo: Yep!
Vegetarian: Nope! But you could skip the meat in favor of more vegetables and a vegetarian protein of choice.

Pro tip: cook the spaghetti squash ahead of time while you’re cooking other meals to save time on busy weeknights!
Seasonings: feel free to change things up with different seasonings. I love using homemade Italian Sausage Seasoning, but when I’m out, I just use a blend of spices from my pantry, such as those listed, to equal about 3-4 teaspoons of spices.
Spice: omit or reduce the red pepper flakes for little ones!

Nutritional Label is for beef.