Today I'm doing something I haven't done much here. I'm taking a slightly deeper dive into a super trendy food: quinoa. Is it nutrient dense? Can it taste good? Is it healthier than brown rice? Should you eat it? 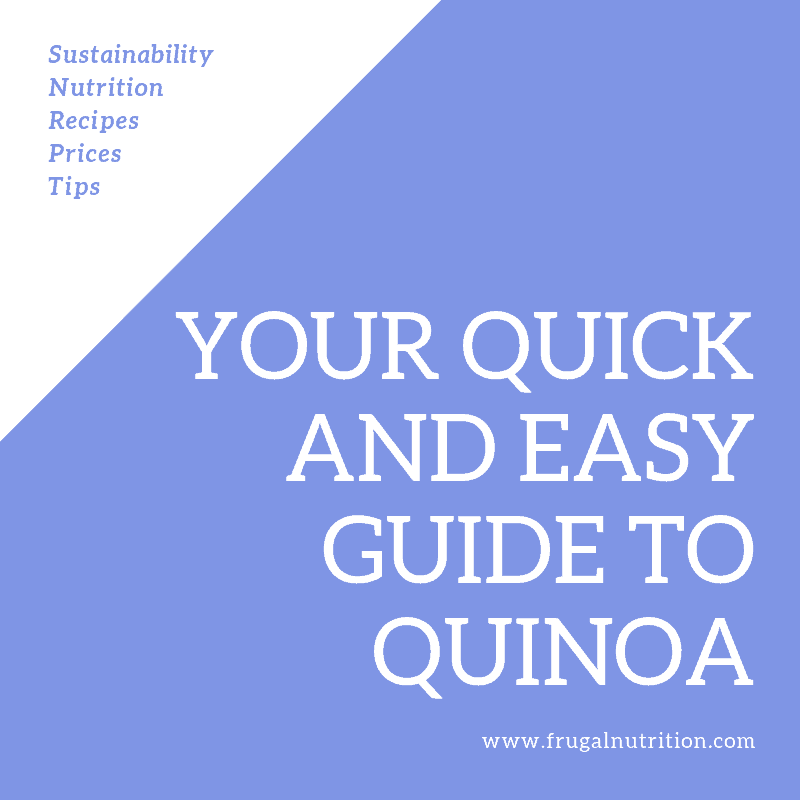 It's a pseudocereal / pseudograin. We usually use it as a grain, but it is technically a little seed. It hails from the Andes mountains, and is most frequently harvested in Peru.

Uncooked quinoa is circular is shape and is similar in size to chia seeds and sesame seeds. Once cooked, the quinoa seed's endosperm blooms and you'll see what looks like a little tail wrapped around the seed.

There are multiple varieties of quinoa, but the most common varieties are white, red, and black. 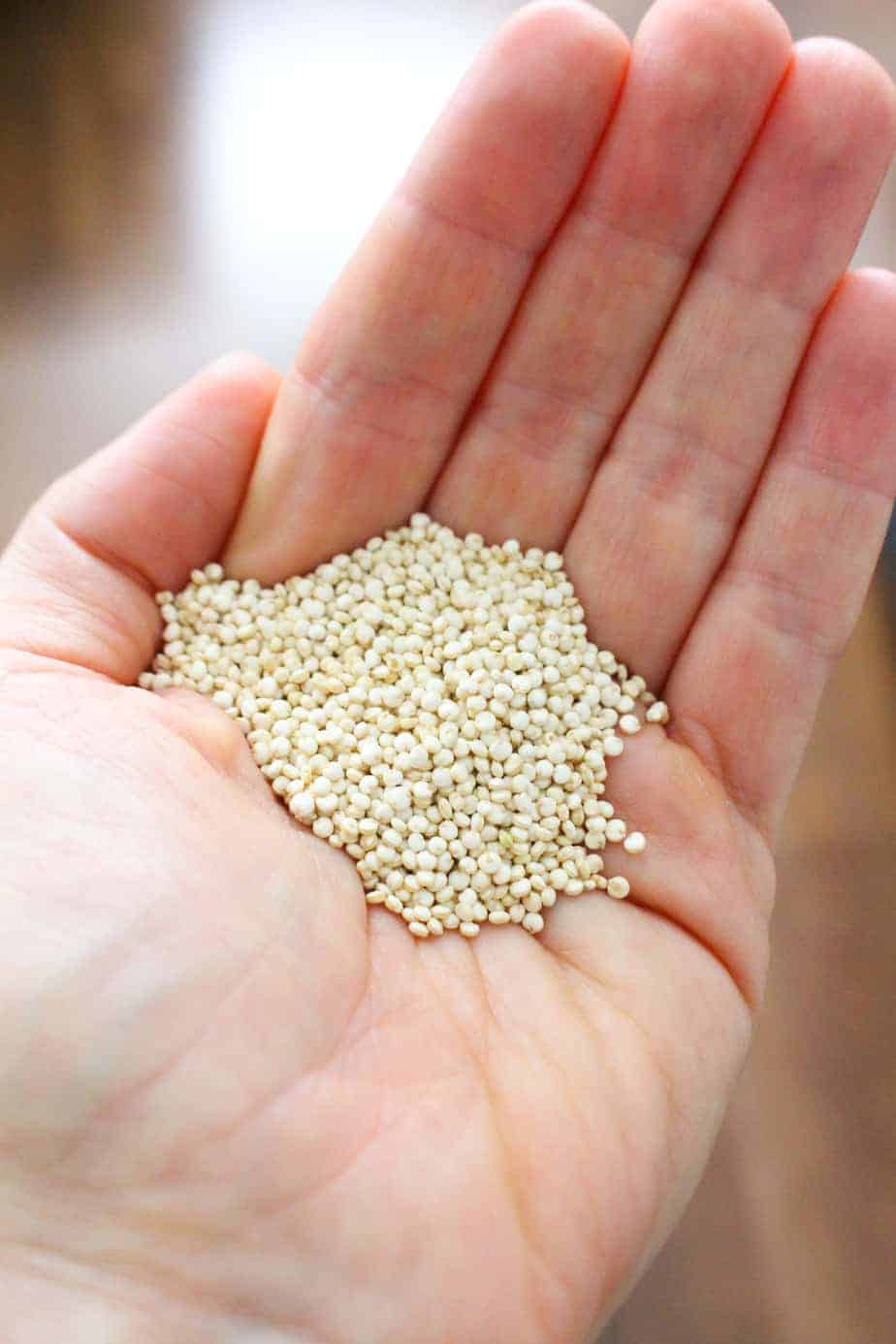 Is Quinoa a Carbohydrate or a Protein?

This one is easy: quinoa is a carbohydrate. But remember, most foods are made up of more than one macronutrient.

According to the World's Healthiest Foods, ¼ cup of cooked quinoa contains:

Quinoa is definitely a protein-dense carbohydrate option, especially when compared to potatoes, rice, and most other grains, but it in and of itself should not be considered a main source of protein.

Everyone's macronutrient needs vary, and I'm sure plenty of people will disagree with me, but it is my professional opinion that quinoa should be considered a carbohydrate. (Which is not what I thought prior to getting my MS in nutrition!)

Quinoa nutrition has long been a topic of debate. In some standards, it is considered a "complete protein" meaning that it has enough of all 8 essential amino acids for adults. However, other standards claim the amount of lysine is too low to be complete.

Further participants in the debate claim that complete proteins and pairing complementary proteins is unnecessary.

I think it's best to step back and look at quinoa for what it is: a grain-like food that happens to be high in protein, fiber, and minerals. It's a solid source of magnesium, zinc, and manganese.

And the term healthy is a little misguiding. Quinoa is certainly real food, provides nutrients, and most people can eat it safely and without discomfort.

As someone who follows a mostly Paleo-ish way of eating, I felt this had to be covered.

Quinoa is not Paleo. This is in part due to the saponins (discussed below), as well as the relatively higher glycemic index of 53. However, the glycemic load of quinoa is just 13 for a ¾ cup serving (cooked). That is pretty reasonable, especially since I consider a serving size of grains and quinoa to be between ¼ cup to ½ a cup cooked.

Is Quinoa Better Than Brown Rice?

"Better" is a pretty tricky word. Instead, let's compare the two. 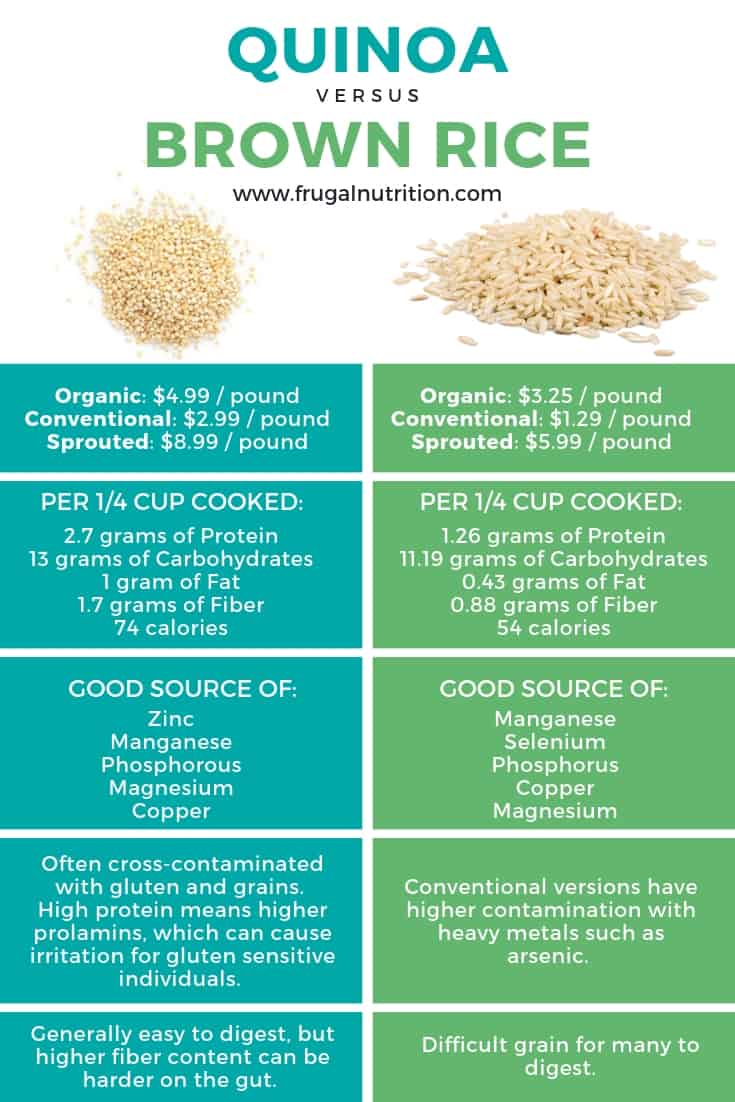 Quinoa is definitely more expensive than brown rice, but it is also lower in calories so you get less energy for your dollar. However, quinoa has lower levels of arsenic and heavy metals than rice, is higher in protein and fiber, and is richer in micronutrients (hello magnesium and manganese!).

You'll also see that quinoa, a gluten-free option, often has issues with contamination due to processing. And, due to the high fiber content, quinoa can cause digestive distress in those with any sensitivities to fiber. (Hi, SIBO friends.)

Many people do also have trouble digesting brown rice, which is usually related to poor enzyme production and disrupted gut function. Zac and I eat both quinoa and brown rice in minimal to moderate amounts, but if you're looking for micronutrient density, quinoa is your friend.

How to Cook Quinoa

Cooking quinoa is relatively easy, even easier than cooking rice!

Do I NEED To Rinse My Quinoa?

The short answer: you probably don't need to, but it will probably taste better and cook more evenly.

The long answer: it depends. Grains you find in the states are relatively processed before they hit grocery store shelves; it's incredibly rare to find stems and rocks and such in a bag of quinoa (technically a seed, not a true grain), rice, or even beans.

In Peru, I always sorted and rinsed quinoa (and other bulk goods), because it was common to find chunks of dirt, rocks, stems, etc. in the bag. However, most of these bulk goods found in the states have already been sorted and rinsed. Most people will tell you to rinse quinoa to remove the bitter saponins.

Saponins are phytochemicals that impart a bitter taste in the quinoa. They're also a bit controversial in that they're technically plant toxins that cause intestinal irritation and damage in some people, functioning as anti-nutrients that block the absorption of other nutrients.

If you've got a solid gut lining, you can probably tolerate moderate amounts of saponins, but if you have any existing gut issues, the saponins are more likely to do some damage. On the flip side, some science shows that saponins have positive effects - such as functioning as antioxidants - so just like most nutrition science, we don't know enough to know for sure.

Nowadays, most quinoa goes through an abrasion process that removes the outer saponins (and part of the bran), so you probably don't really have to wash your quinoa.

As for me, those old habits die hard, and I picked up a lot of them while living in a third world country: I check before drinking tap water (even in America), I sort through my beans, and I always rinse off my eggs, rice, and quinoa.

How Much Liquid to Cook 1 Cup Quinoa?

Personally, I use 1 ¾ cups (1.75 cups) water or broth to 1 cup of quinoa most of the time, but, you should try both ways! My coconut milk quinoa recipe calls for 1.5 cups of thick and creamy coconut milk for 1 cup of quinoa, but other recipes will call for different amounts. It depends on what I'm doing with the quinoa.

I will say that quinoa likes to jump when you eat it, especially if it has been cooked in less liquid. If you use more liquid, it becomes slightly softer and less likely to fling all over the table when you're eating arugula salad. Not that we've experienced that or anything.

Can you Cook Quinoa in a Rice Cooker?

Yes! Definitely! I've done it many times, and I keep the ratio the same as on the stovetop.

I used it as a bit of a protein substitute since we didn't eat a lot of meat back then, (and I was taking my very first nutrition course through Stanford (free) Online so my understanding was very very basic).

In my very first blog post (which I deleted!), I shared a quinoa recipe, immediately received a rude comment about quinoa being too expensive (which I deleted), and was so devastated that I didn't blog again for 8 months.

Now I usually buy organic quinoa for $4.99 / pound at Sprouts (though I try to snag it when it's on sale). Sometimes I buy regular quinoa for $2.99 / pound at my local Safeway also cause I'm technically unemployed - you do you.

How Do You Make Quinoa Taste Good?

Personally, I really love quinoa. It could be from years of eating it, or the care my Peruvian hosts took in teaching me how to make it taste good, but it is definitely one of my favorite starch options. However, I am well aware that is not the case for everyone.

If you're hesitant, I do recommend rinsing your quinoa to remove any bitterness, and then check out some of the alternative cooking liquids, flavors, and recipes below!

Cooking quinoa with coconut milk is a great way to add fat and flavor, especially if you avoid dairy. This also lowers the overall glycemic index of quinoa, providing longer satiation and decreasing insulin and blood sugar spikes.

Not into coconut? No worries, check out these flavor options and recipes below:

Should We Eat Quinoa?

I can't give this one a blanket answer, but here are a few questions you can ask yourself before deciding whether to eat quinoa or any other food.

I hope this post helps answer all your questions about quinoa in a relatively simple way. Additional queries? Drop 'em in the comments below!